Taking the Rápido along the Amazon from Leticia to Puerto Nariño

No roads link the towns and villages of the Colombian Amazon. Public transport between Leticia, the Amazonas department capital, and Puerto Nariño, the next largest town with around 6,000 mostly indigenous inhabitants, is by boat.

The rápido, or rapid launch, leaves Leticia three times a day at 8am, 10am and 2pm. It gets busy so it’s best to buy tickets in advance.

It’s possible to explore the Amazon using organised tours but we avoided these because, being chronically ill, I struggle to keep pace with healthy people; and besides there’s something innately satisfying about navigating your way around by public transport. 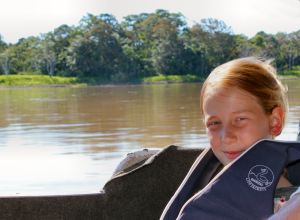 Once aboard the rápido, it’s worth tolerating the second-hand sweat left by the previous occupants of the lifejackets for the safety they provide in the unlikely event of a mishap.

The Amazonian breeze and the excitement of travelling the great river soon dissipate the dampness and odour.

With Peru on the left bank and Colombia to the right, the 87km between Leticia and Puerto Nariño takes around two hours in the rápido.

We passed wooden canoes, some powered by outboard motors, some by oars, as we ploughed through the brown water. Children splashed at the water’s edge while women washed clothes in the river. 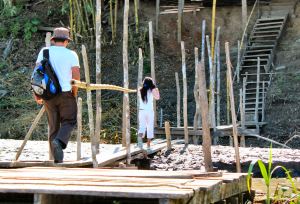 Groups of wooden huts on stilts with palm-thatched or corrugated metal roofs punctuated the jungle to form small settlements along the banks. Santa Sofia, La Libertad, Macedonia and 20 July were some that warranted village name plates.

The rápido stopped wherever it was hailed or where people wanted to disembark. Wooden planks and makeshift log and mud steps formed embarkation jetties in villages along the way.

Dwellings on stilts along the bank

The Amazon is central not just to the lives of the people who live here and use it for transport, washing, bathing and fishing, but pivotal for all of us because of its role in maintaining the health of the world.

The ‘lungs of the earth’, as the cliché dubs the Amazon rainforest, convert carbon dioxide into oxygen producing 20% of the earth’s supply.

The Amazon crosses national borders and transcends them by affecting the atmosphere of the entire planet.

Amazonian tributaries fan out like veins across a large part of South America and the cooling effects of its rainforests help combat climate change.

Water falling as rain and snow on the Andes drains into the Amazon basin, which holds 20% of the world’s fresh water. Rich in flora and fauna, the Amazon is one of the earth’s most biodiverse habitats.

Interconnectedness with nature and each other can be felt profoundly here. Demand from the northern hemisphere threatens this river and its rainforests, but without it we would all suffer immeasurably.

As the río Loretoyacú converged with the Amazon, Puerto Nariño’s jetty came into view: more substantial than the village jetties and built on high stilts to withstand the tide during the rainy season, when water levels rise by several metres.

We’d completed our first journey on the jungle highway – the pulmonary artery carrying ‘rush-hour’ traffic. But our ancient route followed the wake of canoes whose oars must have disturbed these waters millennia before.

Here’s my video of the journey: