Colombian Independence – Reverberations of a Vase Smashed 200 Years Ago

Posted on February 11, 2014 by colombiadiaries

Before independence, Colombia (or the Viceroyalty of New Granada of which it formed part) was permitted to trade only with Spain, a country unable to supply its market. Spaniards ran its administration; even elite criollos (American-born Spanish descendants) were excluded from eligibility for high administrative posts – a sore point amongst some who sought to maintain unity with Spain by arguing for their right to equality as ‘offspring of the conquistadors’[1].

Spain’s military and political position weakened during the Peninsular War and surrounding events. Whilst Europe squabbled, its colonies seized their opportunity: Quito, Caracas, Cartagena and Cali declared a level of independence and by July 1810, Santa Fe de Bogotá was something of a viceregal island bastion. 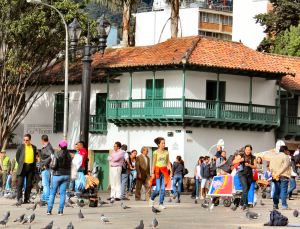 A plan to liberate the capital emerged: on 20 July 1810, patriots asked the Viceroy for an open meeting to discuss independence, which he predictably refused.

They also requested the loan of a vase from Spanish merchant Joaquín González Llorente to grace the table of visiting patriot sympathiser Antonio Villavicencio, again knowing he would refuse. He did so arrogantly, provoking the patriots to smash the vase, which inflamed Llorente further.

Once the masses took to the streets protesting Spanish arrogance, demands for a meeting to settle the future of New Granada grew louder and more persuasive. Only the Mayor of Bogotá’s intervention saved Llorente’s life, and the Viceroy had no choice but to agree to the election of a local junta.

The junta gave Santa Fe de Bogotá a level of autonomy whilst remaining loyal to the deposed Spanish king, Ferdinand VII; but declared full independence in 1813.

La Patria Boba (The Foolish Fatherland) (1810-1826) marks a period of instability and clashes between federalist, centralists, royalists and patriots in New Granada, culminating in Spain retaking the region.

But no one expected Simón Bolívar – the Spanish left the Andean route to the east unguarded, as they considered it impassable. But Bolívar led an army, including a British legion, through the waist-deep malarial waters of the llanos and over the freezing peaks of the eastern cordillera. Taking the Spanish by surprise, his decisive victory at the Battle of Boyacá on 7 August 1819 won full independence.

Whilst the events of 20 July 1810 began the process of independence, the Battle of Boyacá finalised it.

Today 20 July is celebrated as Colombian Independence Day, though 7 August is also a public holiday celebrating Bolívar’s victory at the Battle of Boyacá. 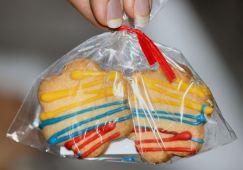 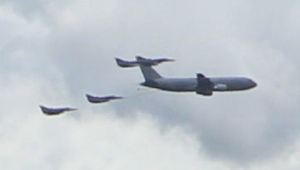 Independence day fly past in Bogotá

Traditional music and stilt dancing enhance the party atmosphere while you enjoy some empanadas and a glass of guanábana juice followed by arroz con leche or salpicón.

But how independent is Colombia today?

On 20 July 2010, 200 years to the day after Llorente’s vase was broken, 18,000 people marched through Bogotá protesting against the policies of the then president Alvaro Uribe and colonialism. This led to the foundation in 2012 of the Marcha Patriótica, a social and political movement ‘for the second and definitive independence’.

Their struggle for peace and democracy embraces a negotiated end to the long-standing armed conflict and reparation for the victims, agrarian reform including stabilising food prices and land reform, reversing damaging free trade agreements and stemming the tide of economic imperialism.

This grim déjà vu of the murders of 3,600 Unión Patriótica leaders and members in the 80s and 90s with almost complete impunity is a brutal warning of the risk of political genocide that left-wing organisations must face if they are to participate in Colombian politics.

The Marcha Patriótica assassinations also undermine the peace talks between the Colombian government and the FARC, currently taking place in Havana. A condition for peace is the inclusion of the left in Colombian politics, but the assassinations show this will not be tolerated.

Multinational oil and mining companies continue to strip Colombia of natural resources, causing environmental damage and an increased forced displacement of local people by paramilitaries, while profits go into the pockets of foreigners and a small but rich and powerful oligarchy. 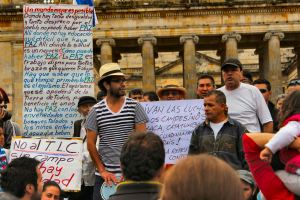 The agreements were signed with the promise of more jobs and economic growth for all, but in reality the small print contained devastation for many Colombian farmers. Riot police confiscated produce now deemed ‘illegal’ and farmers were threatened with jail. But this produce was not coca, but rice.

The terms and conditions of the free trade agreement with the United States criminalised the farmers for doing what their ancestors had always done – taking the best seeds of the harvest to sow for next year – and obliged them instead to use only ‘certified seed’, mainly produced by large multinational corporations. Far from creating jobs, many were lost – not just farmers but their labourers and those traditionally involved with drying seeds. And ‘certified seed’ can only be used once as saving seed for the next harvest infringes copyright law.

Once the multinationals have the monopoly, they are free to impose whatever conditions they like – obliging farmers to buy fertiliser and pesticide ‘packages’ along with their seeds, after all the genetically modified seeds might not grow properly without them.

Even indigenous people who live in intimate communion with the land have not escaped. They too have been forced to abandon their traditional farming methods in favour of ‘certified seeds’, sometimes inferior and not suited to their specific climatic conditions.

The ‘War on Drugs’

Perhaps a switch to coca crops is the answer? Coca is a profitable crop, its leaves being the raw material processed to satisfy the demand for cocaine in Europe and North America. It yields harvests three times a year and can be grown in various different climates.

But the US ‘war on drugs’ has meant that US planes and Colombian planes paid for by US money have fumigated huge swathes of Colombia ostensibly to destroy coca crops but in reality taking a huge toll on people, environment and any living thing in the vicinity.

Though Colombian President Juan Manuel Santos has spoken out against the ‘war on drugs’; and, during a recent trade visit to Colombia, British Deputy Prime Minister Nick Clegg said ‘Nobody can say the world is winning the war against drugs,’ their sentiments have yet to transform into policies.

The ‘War on Terror’ 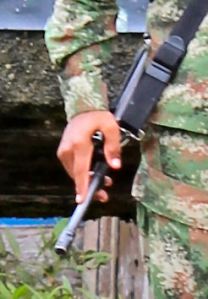 The ‘War on Terror’

The United States occupies several military bases throughout Colombia, not just under the auspices of the ‘war on drugs’ and the ‘war on terror’ against the guerrilla, but also to afford them the opportunity of conducting operations against governments who do not share their philosophy. Venezuela, Ecuador and Bolivia for example all have left-wing governments.

From the time Europeans first set foot in the Americas and devastated the indigenous populations we inextricably linked ourselves with that continent. Now, in an age where profit and capital know no borders yet the word ‘immigrant’ is used to disparage, independence is a delusion for the benefit of multinational corporations and the small oligarchy that feed off them.

Are European and North American taxpayers fortifying an oppressive Colombian military in the name of ‘foreign aid’? How comfortable are we that our governments sign free trade agreements that have such a devastating effect on our trade ‘partners’? Would our drug habits be better tackled by the more efficacious method of educating users rather than annihilating growers and everything that surrounds them?

Until we abandon the exploitative notion of ‘each for their own’ and treat all human life as equal, we can only hope that Colombia wins its ‘second and definitive independence’ sooner rather than later.

Social and political commentary on Colombia (in English):