Bogotá to Zipaquirá, How Colombians Treat Foreigners and an Unexpected Refuge

Posted on November 30, 2013 by colombiadiaries

Though illness deprived me of a good night’s sleep, I was pleased to have made it to Colombia and been able to see some of Bogotá. I hoped I’d be well enough to travel to Zipaquirá to see the salt cathedral.

Some hours later, the rest of the family began to stir and I creaked towards the shower in pain and silence. The warm water eased my discomfort enough for me to shuffle to breakfast feeling a little better. 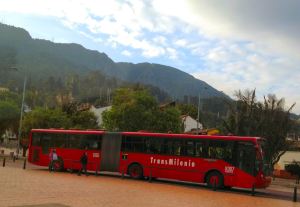 We took the Transmilenio to the north of Bogotá. The above-ground stations of the city’s rapid transport system were far easier for me than the steps and tunnels of the London Underground, which I’ve been unable to tackle since my illness began. Though it feels like a metro, the Transmilenio runs at street level using bendy buses in dedicated bus lanes. A Transmilenio station can be seen in the video below.

A brief pause at the barrier instigated a flood of assistance from people showing us how to get through – very similar to the London Underground Oyster card system. In a few paces we were aboard and heading north.

At the Terminal del Norte, we had only to cross the platform to reach the Zipaquirá bus.

Here’s a short videocito to give a flavour of the journey:

As we approached Zipaquirá, a woman sitting near us asked if we were going to the salt cathedral. When I confirmed that we were, she asked the bus driver to stop the bus. 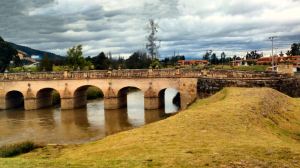 She led us through the streets, slowing to my pace, instinctively understanding that I could not walk quickly. A left turn here, a right turn there, over a railway track through a supermarket and out the other side, past the meat grill restaurants to the entrance to the salt cathedral. She shook our hands and wished us well, her smile beaming beneath rosy cheeks framed by dark, curly hair.

After she’d gone, we looked at each other hardly believing the kindness and helpfulness she’d shown us. I’m ashamed to say I doubt foreigners would be shown such consideration in my native UK. 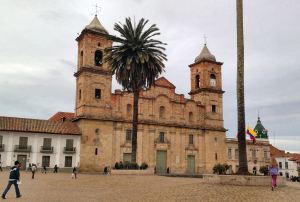 The walk took its toll – by the time we stood at the ticket booth the various permutations of entrance tickets swam before my eyes. If it was simply a matter of asking for the different activities and classifications for each person – child, adult, with/without climbing wall, cathedral, salt mine, museum – I might have managed. But my headache was too intense to successfully convert the information to package A3, A5 etc. as was displayed on the board. I ended up ordering the wrong combinations.

My knight in shining armour was a lady in the queue. Assuming I was having language difficulties, she intervened on my behalf and sorted out the problem. It then occurred to me that I could hide behind a second language when in reality I was struggling through illness. It seems more acceptable to flounder because of language than illness. You feel less odd, less different. Many people struggle in a foreign language – that is acceptable, but being ill is not comfortable in societies where health and fitness are not just valued, but idolised. Illness is not talked about. Even the dying are praised for sparing the living from their suffering: ‘s/he never complained’, ‘you wouldn’t know s/he was ill’. There are strict unspoken guidelines on how illness is handled – the more invisibly the better.

I sat on a low wall to rest and recover for a while before entering the cathedral. I thought of how helpful Colombians are to foreigners – the people showing us how to use our Transmilenio tickets, the lady on the bus and the lady in the queue. Their kindness and compassion stayed with me and inspired me. We Europeans have much to learn.

I thought also of my new-found refuge in the Spanish language – an unexpected but welcome bonus, and one that I would continue to shamelessly exploit for the rest of the trip.

8 Responses to Bogotá to Zipaquirá, How Colombians Treat Foreigners and an Unexpected Refuge