Posted on October 31, 2013 by colombiadiaries

Nestling at the foot of the Cerro de Monserrate and now on the outskirts of Bogotá, the Quinta de Bolívar was once a country estate set apart from the city.

In 1820, the Colombian people gave the Quinta to Simón Bolívar as a gesture of gratitude for liberating the nation from Spanish rule, and the property was honoured by his presence intermittently during the last ten years of his life. 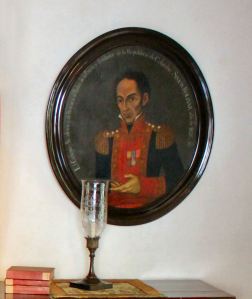 Here, as President of Gran Colombia, he advanced plans for his ambitious project of Latin American unification. But, in the latter years of disillusionment, the Quinta was his refuge from political struggle and betrayal. It was also his shelter in times of ill health caused by tuberculosis, which was ultimately to kill him. Being chronically ill myself, I could imagine how the Liberator found rest and convalescence in this peaceful oasis.

European influence is evident from the French architectural details of the dining room, to the Italianate mirador and outdoor bathing area. 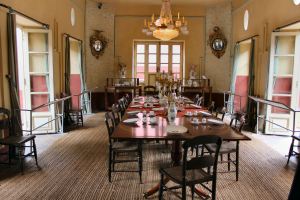 The rooms are furnished as they would have been at the end of the colonial era, reflecting the baroque and rococo tastes of the aristocracy.

Some of the Liberator’s personal possessions are also to be found here. The desk at which he might have read Rousseau and Voltaire, fermented revolutionary theories and analysed triumphs and defeats stands in a living room at the front of the house. A clock he picked up on his European travels, portraits, crockery and chamber pots evoke the period atmosphere. 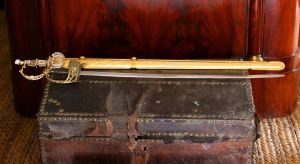 For me, the most significant object was his sword, or rather two of his swords that are placed on a chest at the foot of his bed.

One is a replica of a solid gold sabre encrusted with diamonds and rubies that the municipality of Lima presented to Bolívar in 1825 following the liberation army’s victory at the battle of Ayacucho the year before.

The other is a more utilitarian weapon that was captured by the M-19 guerrilla group in 1974 and not returned until 1991.

These swords inspired the quest in my work-in-progress novel The Sword of the Naked Liberator. 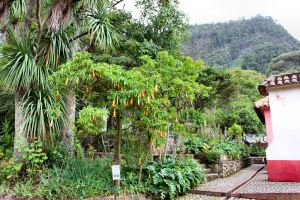 The tranquillity of the gardens defies its urban setting to provide a welcome respite from the city. Hummingbirds dart around pink begonias and crimson bell-flowered raques.

Walnut trees rise from the Andean woodland floor, challenging the colonial viceroy’s orders to fell them in this area in an attempt to stamp out the indigenous Muisca population’s veneration of them. Wax palms, Colombia’s national tree, surround the ‘American fraternity tree’, one of many cedars growing in the grounds. Some of the ornamental trees are said to have been planted by Bolívar himself.

The Plaza de Banderas, a patio lined with the flags of the six nations Bolívar liberated, statuary and a modern glass cube housing an exhibition of his military campaigns punctuate the gardens. 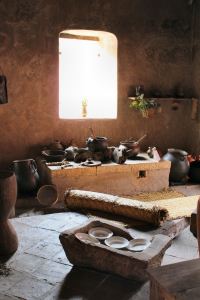 Vegetables grown here supplied the estate’s kitchens which are now furnished to give a sense of how they might have looked in Bolívar’s day. Perhaps here José Palacios, Bolívar’s faithful servant, prepared curative potions for the Liberator using herbs and medicinal plants grown in these gardens.

Bolívar personally prepared salads for his guests using lettuce, cabbage, chards, potatoes and corn grown in the kitchen garden. To the recipes he learned from French ladies, he added indigenous ingredients such as cubios and arracachas.

Whether celebrating military victories or enjoying more intimate meals with his devoted lover Manuela Sáenz, it is tempting to imagine the Liberator appearing at the main door of his elegant dining room bearing a bowl of Bolivarian salad and that faint, wry smile sometimes captured in his portraits.

The Quinta de Bolívar’s rural surroundings and attention to period detail nurture the soul and allow the imagination to slip back two hundred years. A retreat from the city and from the twenty-first century, it is one of Bogotá’s most relaxing spaces.