Colombia: A Trip Too Far?

Posted on September 24, 2013 by colombiadiaries 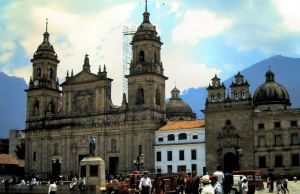 I first visited Colombia twenty-seven years ago. Armed with nothing more than a standby ticket to Bogotá, I travelled the country alone by bus. It was a great adventure.

Yes I saw guns and knives, someone was robbed at knife-point in front of me and a bus I was travelling on was stopped and everyone searched by men in military uniforms of unknown allegiance. For a few days I was so ill with a high fever that I thought I would die on a cheap hotel bed beneath a noisy ceiling fan.

But I fell in love with the country, from Bogotá’s glorious gold museum to Cartagena’s legendary Spanish colonial architecture. It has everything: the majesty of the Andes, tropical jungles, beautiful beaches, magical cities and much more.

That was in 1986, and returning to Colombia has been a dream of mine ever since; even if only a distant plan, a project for retirement perhaps. But a contradiction that was both catalyst and barrier strengthened my resolve.

Two and a half years ago I caught a virus which left me chronically ill. Sometimes I struggle to walk to the bathroom, but my illness has improved enough for me to swap my wheelchair for a walking stick, though I prefer to call it an ‘adventurer’s trekking pole’.

Being suddenly incapacitated forced me to engage with life’s unpredictability: anything can happen at any time. It made me understand the importance of seizing the day, carpe diem and all that. The future is uncertain: I might get better, I might get worse, but I feel an urgent need to make this trip while I can, even if only just. So, in a moment of madness at the height of one of my better days, my husband and I booked the flights.

In ’86 I went where the mood took me. Now we’ve pre-planned and pre-booked every detail of our itinerary. This is partly the difference between travelling as a carefree singleton and as a responsible parent, and partly because I’m unlikely to be well enough to think through where to go or what to do when we get there.

I’m too ill to maintain the pace of another option – the organised tour.

My husband’s employer has been good enough to allow him to take a substantial block of leave, giving us time to travel slowly. Careful pacing, resting and avoiding demanding activities will be essential. No abseiling, white-water rafting, high altitude treks or even salsa dancing for me, however tempting. No late nights or alcohol. Slow walking will be as challenging as it gets and even that is likely to exacerbate my illness.

Some friends have been honest enough to tell me I’m too ill to go. Maybe they’re right, but I have to try. Some think we’re irresponsible to take the children. The country does, after all have an unfortunate reputation. But based on facts rather than prejudice, Colombia is now a relatively safe place to visit.

Travelling has been one of the greatest joys of my life and I want to share it with my children. There have been too many things my illness has prevented me from doing with them.

So we’re off to Colombia.

6 Responses to Colombia: A Trip Too Far?